First organized in 1998, The Uçan Süpürge International Women’s Film Festival, which grew side by side with the women’s liberation movement in Turkey, will have Surviving Purgatory as its theme this year. The festival, which was held only through online platforms last year due to the pandemic, hopes to welcome its audience in virtual and real venues this year. The awards given by the festival every year to emphasize the work of women in Turkish Cinema and to encourage a new generation of female filmmakers will be presented to their owners at the opening ceremony on May 27th. 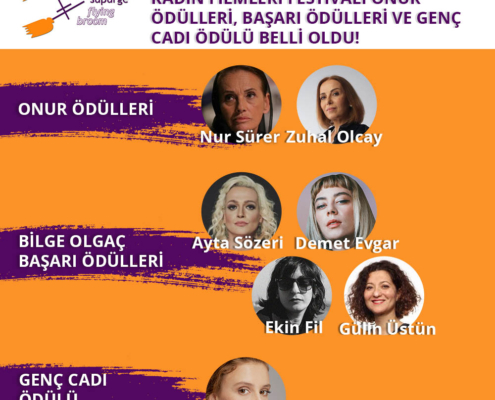 Nur Sürer and Zuhal Olcay will ve presented with the Honorary Awards.

The Honorary Awards, which will have their 19th edition this year, are given to directors or actresses of Turkish Cinema. This year’s Honorary Award winners are; Nur Sürer, who over the course of 40 years, broke the boundaries of male directors, shocked the audience, played female characters who are not easily socially accepted in movies such as; “Bereketli Topraklar Üzerinde”, “Uçurtmayı Vurmasınlar”, “Ayna”, “Yılanların Öcü”, “Bir Günün Hikâyesi”, “Uzlaşma”, “Sır Çocukları”, “Fidan”, “Dul Bir Kadın”, “Umuda Yolculuk”, established a solid bond between Yeşilçam and contemporary Cinema and fought for better rights for cinema workers. And the brave multi-talented artist Zuhal Olcay, who never gave up the theatre where she had award-winning performances as “Martı” s Nina, “Balkon” s İrma, “Dolu Düşün Boş Konuş” s Donna, released albums with songs like “Küçük Bir Öykü Bu”, “İyisin”, “Ankara’da Âşık Olmak” that made their mark in our memories, who, after starring in her first and award-winning screen performance “İhtiras Fırtınası”, made the audience contemplate on womanhood, relationships, friendships, marriage, domestic slavery, gender, and the women on edge with films like Halkalı Köle”, “Amansız Yol”, “Dünden Sonra Yarından Önce”, “Sahte Cennete Veda”, “Medcezir Manzaraları”, “Bir Sonbahar Hikâyesi”, “Hiçbiryerde”, “İki Kadın”.

An Alliance of Actors, Musicians, Producers and Activists through Bilge Olgaç Achievement Awards

In order to celebrate the achievements of women that work in different frontlines of Turkish Cinema, Bilge Olgaç Achievement Awards are given in memory of socio-realist director Bilge Olgaç, who was described as a “miracle” by Nur Sürer and was one of the first female directors in a male-dominated industry. The award will be shared by four people this year.

These people are; Ayta Sözeri, actress, singer, human rights and LGBTI+ activist, who started appearing on screen after a career in music and starred in many movies such as “Aile Arasında”; Demet Evgar a self-proclaimed story teller who after first acting on stage around the age of 17, played characters that made their mark in our memories both on and off screen such as “Beyza’nın Kadınları”, “Aşkın Gören Gözlere İhtiyacı Yok”, “Sofra Sırları”, who is the founder of Tiyatro Pangar a theatre company that performs brave scripts and founder of Hata Yapım Atölyesi where she is an instructor; Ekin Fil, an outstanding name in a young generation of musicians who first made her mark with her band Proudpilot, who first started composing music for movies with “Kaygı” and then continued with “Körfez”, “Evde Yok”, “Witch Trilogy 15+” and “Ghosts”; and the director of IFF Meetings on the Bridge, Gülin Üstün who worked in different fields for over 20 years, such as production, sales, marketing and contributed a great deal to Turkish Cinema while working with independent filmmakers to get their names known on an international level.

The Young Witch Award that’s presented since 2009 to encourage female actors, to support their journey in Cinema and shed light on their work in this field and to promote the creation of strong positive female characters in Turkish Cinema. It will be presented to Ahsen Eroğlu who had a critically acclaimed role in Ozan Yoleri’s short movie “Aylin” and whose first feature movie appearance can be seen on “Sardunya” soon.

Presented by the festival for the first time in 2013; The Theme Award, in which women who have dedicated their lives to their field of “work”, will be announced in the coming days.

The deadline for applications to the festival is February 26th.

Female moviemakers from Turkey want to screen their short, medium full length fictional, experimental movies or documentaries in the 24th Uçan Süpürge International Women’s Film Festival, which will take place between 27 May- 3 June 2021, can apply till 26th February.

Cookies are used on this site. By continuing to browse our site, you accept our use of cookies.

We may request cookies to be set on your device. We use cookies to let us know when you visit our websites, how you interact with us, to enrich your user experience, and to customize your relationship with our website.

Click on the different category headings to find out more. You can also change some of your preferences. Note that blocking some types of cookies may impact your experience on our websites and the services we are able to offer.

These cookies are strictly necessary to provide you with services available through our website and to use some of its features.

Because these cookies are strictly necessary to deliver the website, refusing them will have impact how our site functions. You always can block or delete cookies by changing your browser settings and force blocking all cookies on this website. But this will always prompt you to accept/refuse cookies when revisiting our site.

We fully respect if you want to refuse cookies but to avoid asking you again and again kindly allow us to store a cookie for that. You are free to opt out any time or opt in for other cookies to get a better experience. If you refuse cookies we will remove all set cookies in our domain.

We provide you with a list of stored cookies on your computer in our domain so you can check what we stored. Due to security reasons we are not able to show or modify cookies from other domains. You can check these in your browser security settings.

These cookies collect information that is used either in aggregate form to help us understand how our website is being used or how effective our marketing campaigns are, or to help us customize our website and application for you in order to enhance your experience.

If you do not want that we track your visit to our site you can disable tracking in your browser here:

We also use different external services like Google Webfonts, Google Maps, and external Video providers. Since these providers may collect personal data like your IP address we allow you to block them here. Please be aware that this might heavily reduce the functionality and appearance of our site. Changes will take effect once you reload the page.

The following cookies are also needed - You can choose if you want to allow them: